Students of the history of photography will recognize this landmark, the Chevron station at Beverly and La Brea. Originally photographed by Stephen Shore on June 21, 1974, it soon became an international art world icon.

When I drove into this, my local station for gas on January 24, 2010, I encountered one of the six German photographers who have been invited to Los Angeles as artists-in-residence "to search for photographic points of reference to this iconic picture." In my cell phone photograph he is standing on the sidewalk beside a large-format camera mounted on an enormous tripod, a yellow sweater draped around his neck.

I am trying to give the La Brea Matrix Project the benefit of the doubt, though it's hard when all six photographers are men and their web site ruminates without irony, "it is interesting to note that the original meaning of matrix is womb. As a rectangular structure, the matrix of the pictorial space points towards markedly rational strategies that will later be found in art photography in Germany," und so weiter.

Maybe these guys just wanted to come to Los Angeles. Who could blame them, especially in January?

It surprises me how proprietary I suddenly feel about my gas station, my streets, my views of this city. Now I know how my counterparts, photographers who live in other countries, may have felt all those times I showed up in their neighborhood with a camera; though mine was hand-held, less conspicuous, I'm not sure that matters in terms of the proprietary question. One of our great American philosophers expressed it best: Who's zoomin' who?

Plus, as the sign at the left edge of the frame admonishes, no U-turns allowed. An abundance of re-photographic projects notwithstanding, to what extent can or should photographic artists go back, like pilgrims to holy sites?
PREV / NEXT   17 / 64
BACK TO CHRON 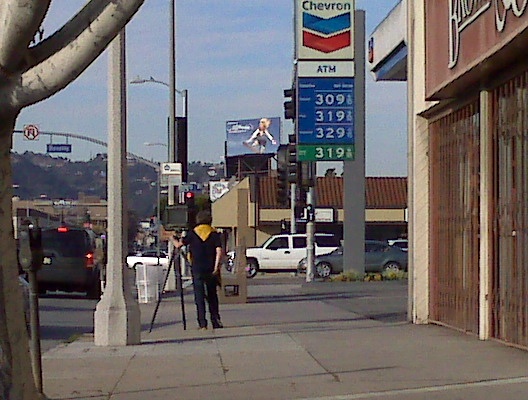